Throughout the past week, we have honored our tour matriarch, Peggy Kirk Bell, for the many feats she accomplished in her seven-plus decade career in golf. In light of her induction to the World Golf Hall of Fame on Monday evening, we’ve ripped and roared along the path she paved for thousands upon thousands of female golfers who would follow in her footsteps.

Spoiler alert: If you’re late to the party and haven’t followed the first three segments, click on the links above to read each respective piece! Then come on back and conclude the story!

Two underlying qualities recur time and time again through recollection and stories of Mrs. Bell’s life: 1) a motherly instinct of patience and compassion, and 2) an eternal drive to improve the game and increase opportunities for female golfers.

As we learned in the last segment, a junior girls’ golf tour based out of the Triad region of North Carolina – just a short drive away from Mrs. Bell’s home course – was making waves around the area. Creating opportunities for girls of all ages and skill level, the tour took an innovative approach by utilizing yardage-based divisions in lieu of the traditional age-based models.

What the organization lacked was an ambassador, a prominent figure in women’s golf to help reach beyond the Triad region, a mother to take pride in representing a movement to change the scope of junior girls’ golf.

We travel back to an idea that would transform into reality and a relationship that would carry on Mrs. Bell’s legacy beyond her time on this earth. In the final installment of our four-part series, Peggy Kirk Bell: The Matriarch

Roughly 13 years ago, PGA Class A Professional Robert Linville spent his weekends watching the girls he coached competing in junior golf tournaments. Linville, a two-time NCAA National Coach of the Year who led the Greensboro College Pride to a National Championship in 2000, was highly respected in North Carolina and across the country. In 1989, Linville started Precision Golf School in Greensboro, where he coached many top junior golfers from the area – many of those were junior girls.

The problem, from Linville’s perspective, was the lack of opportunities for the girls that he was coaching, including his daughter, to compete in tournaments outside of her high school matches. When she did enter these events, the girls’ fields typically existed as an afterthought, consisting of a couple of players, all playing from the same yardage, despite their skill levels.

From the outside looking in, one would conclude that these small field sizes were the result of a lack of participation in junior girls golf – the idea that “girls just weren’t playing”. Linville, on the other hand, understood that was not the case. 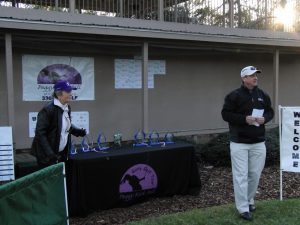 While watching his players at these events, Linville noticed that girls would play if given the right setting and the right opportunity. To Linville, these two events demonstrated that there wasn’t a lack of junior girls playing golf but rather, a lack of quality opportunities for junior girls to compete. The events showed that if girls were presented quality, girls-only opportunities to compete in, they would come and play.

If this one event could draw over 60 girls to compete, imagine the possibilities and the need for events like that across the country!

What if We Could

“What if we could create playing opportunities for the girls that allowed them to develop their skills in a tournament environment?”

“What if we could create a way that more girls could advance their games and play in college and beyond?”

“What if we could keep it as affordable as possible by operating in through our non-profit foundation?”

Linville’s frustration with the lack of opportunities morphed into an idea. Combining brainpower with his business partner and current PKBGT Tour Director Mike Parker, the duo hashed out the concept of an all-girls golf tour.

Shortly thereafter, they put their plan into action. Beyond their greatest imagination, the “idea” would one day grow into the nation’s largest girls-only golf tour that exists today. But let’s not get ahead of ourselves.

With the tour in the middle of its inaugural season, which grew out of a local LPGA/USGA Girls Golf program in the Triad area of North Carolina, a new challenge presented itself. What should we call this new, girls-only tour?

In 1999, Chris Haarlow, Linville’s business partner, and Linville himself founded the Triad Youth Golf Foundation (TYGF) as a way to give back to their community in Greensboro, North Carolina. The PKBGT was born from the TYGF girls golf program.  Haarlow, who serves as the president of the foundation, grew up in Pinehurst, NC – specifically on the driving range of the world-renowned Pine Needles Lodge – knew exactly the person to call. 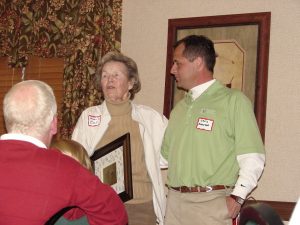 Throughout his junior career, Haarlow was fortunate to learn the game under the direction of, you guessed it: Peggy Kirk Bell. Aside from her stellar playing career and impactful style of instruction, Mrs. Bell was undoubtedly best known for her refusal to conform to “the norm”, defying the odds and creating countless opportunities for women to play golf – the exact mission of the newly founded girls’ golf tour.

In their eyes, what better way to honor the legacy of Mrs. Bell and continue the work she has done to level the playing field for females in the golf industry than to name the tour after her? Bell, who was 87 at the time, agreed to join the movement and serve as the honorary namesake of the newly dubbed Peggy Kirk Bell Girls’ Golf Tour. Thus, Peggy Kirk Bell placed on her final hat: The Matriarch.

With her name tied to the cause, the Peggy Kirk Bell Girls Golf Tour began a four-year expansion in 2008 that brought the tour to a year-round touring schedule with the expansion of multi-day events throughout the Carolinas and Virginia. Membership grew to over 240 members spanning 10 states, which attracted the top players and collegiate coaches to the tour.

Mrs. Bell’s presence was felt at many events, displaying to the girls that she was not simply lending her name to the tour. She would ride around in her cart, taking in the youthful talent – much like with Annika Sorenstam at the 1996 U.S. Women’s Open. Understanding the importance of her support, Peggy made an impact on countless members of her eponymous tour.

While she was physically able, Mrs. Bell served as master of the awards ceremony when events were held at Pine Needles. She gifted trophies – and the opportunity to continue in a career beyond the PKBGT – to the likes of future LPGA tour professionals Katherine Perry and Allison Emrey. 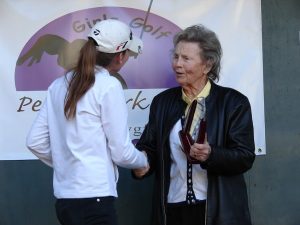 In the coming years, the PKBGT would explode. The Peggy Kirk Bell Foundation was established out of Pine Needles and served as a premier sponsor of the tour. With additional staff and resources, the tour expanded into new states – Georgia and Maryland. Partnerships with the national ranking systems, like-minded organizations, and invitationals bolstered the tour’s reputation and prestige. By 2012, membership increased to over 300 players and spring events routinely drew 90 girls, growing into a pipeline for college golf.

The summer of 2012 brought with it the culmination of Mrs. Bell’s efforts in creating opportunities for women in golf. Once a nugget of an idea, the ever-expanding PKBGT earned a historic stamp as an “Approved Tour” of the LPGA Foundation, the first of its kind in the country. The partnership linked the PKBGT, LPGA Foundation and LPGA/USGA Girls Golf program to expand opportunities for junior girls golfers across the United States.

Though her role with the tour was diminishing as she grew older, the partnership was a symbolic joining of forces between two organizations which Mrs. Bell played a vital role in bringing to life.

“As a pioneer of women’s golf instruction and a Charter Member of the LPGA, I am honored to have the Peggy Kirk Bell Girls’ Golf Tour associated with the LPGA. As the honorary chair of the PKBGT, it has been exciting to watch the tour grow and provide opportunities for girls to learn and play the game,” Peggy spoke of the partnership. “We need to get more girls in the U.S. playing the game and the alliance of the LPGA and PKBGT will continue to grow the game for generations to come.” 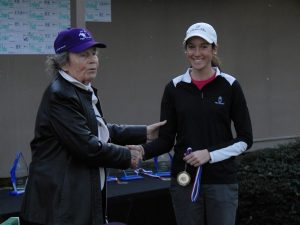 Now, almost 12 years later, Mrs. Bell’s vision has come to life. The tour has grown to over 1,000 yearly participants, running 95 events from Florida to Pennsylvania in 2019 alone. Yet the mission of the Peggy Kirk Bell Girls Golf Tour has not changed – to create opportunities for junior girls to play golf. And there are no plans to slow down.

Although Peggy Kirk Bell left the earth in 2016 at the age of 95, her spirit is felt with every shot, every event and every dream on the Peggy Kirk Bell Girls Golf Tour. We are honored to be able to continue her legacy and embrace her pioneering spirit as we work to change the junior golf landscape in the United States.

An initiative of a 501(c)3 non-profit foundation, our mission is to create as many quality opportunities for girls to play competitively while continuing to keep these opportunities affordable and open to all. Join us in continuing Peggy Kirk Bell’s legacy as we strive to sustain the current growth of junior girls golf by creating 1,000 Girls-Only Golf Tournaments in the United States.

To Donate to the Peggy Kirk Bell Girls Golf Tour Click Here or to learn more about the PKBGT and our Let’s Play Campaign, contact Emily Brooks at ebrooks@pkbgt.org.

And so, our sensational ride along the life and accomplishments of Mrs. Bell comes to a close. Our world would look quite different had Peggy joined the millions of first-time golfers to hang up the sticks after slicing three-in-a-row deep into the forest.

What version of Southern Pines and the golfing community would exist had Peggy not crossed paths with the shot-shaping Patty Berg or the grip-guru Ben Hogan, purchased and perfected Pine Needles Lodge and Golf Club, or invented a wild safari of golfing experience?

In what state would junior girls golf reside in had Mrs. Bell not graciously gifted her name and legacy to the nation’s largest girls-golf tour?

Fortunately for all, Mrs. Bell stuck with it and continually leaped over barriers to bring women’s golf front and center. Today, junior girls’ are the fastest growing segment of golfers worldwide and we strive to carry on her body of work and live #LikeMrsBell.

If you’re feeling inspired by the story of Mrs. Bell, feel free to share our four-part series in its entirety. And if you know of a young lady who would benefit from a positive environment to grow and develop on and off the course, let them know about the Peggy Kirk Bell Girls’ Golf Tour!

Unlike most memorable tales, this one concludes in an atypical fashion. It doesn’t.