Peggy Kirk Bell: The Professional (and the Pilot)

Home/Tour News/Peggy Kirk Bell: The Professional (and the Pilot)
Previous Next

Peggy Kirk Bell: The Professional (and the Pilot)

On Monday evening, June 10, Peggy Kirk Bell, our tour matriarch, was enshrined in the World Golf Hall of Fame alongside countless golf legends to etch their names in golf’s history books. Paving the way for the plethora of opportunities presented to junior girls through the game of golf, Mrs. Bell set a precedent that gender would not determine success on or off the course.

To honor her tremendous lifetime achievement, we present a four-part series highlighting the progressive mindset that led Mrs. Bell to become a trailblazer in women’s golf. In our first installment, we traveled back to the summer of 1939 and the origin of Peggy’s passion for the game.

If you missed Part One, learn about Peggy’s gift born out of boredom in the Summer of ‘39  HERE!

After completing a summer of lessons with Leonard Schmutte, Peggy Kirk uprooted from the comfort of home and traveled to Boston – commencing her studies at Boston University’s Sargent College of Physical Education. Fueled by the thrill that accompanied learning a new sport, more challenging than any she’d tried in her life, Peggy continued working on her game.

In the coming years, Peggy would build an impressive resume on the amateur circuit. In the second stretch of the journey, we trace the early steps of her trailblazing expedition in Peggy Kirk Bell: The Professional (and the Pilot).

Two years into her playing career, Peggy Kirk had a revelation. Word spread around the club of a young woman named Freeda Nolan who was in town to play on the winter circuit. Peggy, unaware of the winter circuit’s existence, was intrigued to go watch Nolan.

After assessing Nolan’s swing for a brief span of time, Peggy realized she could hit the ball the same distance, likely further. So, she set up next to Nolan and started hitting. Compelled by Peggy’s swing, Nolan asked if she would like to join in a round on the course. “Yeah, I want to go play with someone that’s going to play on the tour,” Peggy thought to herself.

As the two began play, Peggy found herself striking the ball and scoring better than Nolan. At the round’s conclusion, Nolan urged Peggy to play on the winter tour. In the midst of her college experience, Peggy figured it was impossible to take time out of her schedule, but Nolan informed her otherwise.

With that, Peggy was off to qualify for her first tournament and begin her competitive career. At 19, she had one goal in mind. She wanted to represent the United States in the Curtis Cup.

Transferring to Rollins College in Florida, Peggy joined the collegiate golf team. She traveled and competed in the first intercollegiate national championship at the Ohio State University that same year. Though she described her performance as “terrible”, shooting somewhere in the 90s, her path crossed with one woman who changed the way Peggy approached the game.

Patty Berg, who Peggy joined this week in the World Golf Hall of Fame, was a professional hosting a clinic to promote Wilson (the company she was sponsored by at the time) at the championship in Columbus. Young Peggy stood in awe as Patty announced, “I’m going to hit the ball from left-to-right,” and proceeded to do just that. The next was right-to-left.

First a draw, then a fade. Never before had Peggy witnessed such precise control of the golf ball. At that moment, she was introduced to the concept of shaping a golf shot, one which she would add to her arsenal in the very near future.

Heading back to the dorms following the clinic, Peggy was approached by Patty asking for a ride. After gazing in amazement at her skill just moments ago, Peggy obliged and aided the professional in need. This would not be the last time their two paths crossed.

Amazed by an Amateur

Peggy graduated from Rollins College in 1943 and, in the subsequent years, took the Ohio Amateur Women’s Golf circuit by storm. She picked up steam in the late 40s, taking three straight Ohio Women’s Amateur Championships from 1947 to 1949. The final of her three-peat kickstarted a truly special run in Peggy’s career.

Peggy topped the leaderboard at the 1949 North and South Women’s Amateur Golf Championship, a prestigious amateur event held annually at Pinehurst Resort. Establishing dominance on the amateur circuit, it was in Augusta, Georgia alongside professional golfers where Peggy summited the pinnacle of her playing career that year.

Competing in the 1949 Titleholders Championship, later designated as an LPGA major championship, Peggy looked to best her runner-up finish from the previous year’s tournament. Riding a four-under-par front nine performance, she would go on to win the championship by two strokes, defeating Patty Berg – a four-time champion of the event at the time who was defending her title, the LPGA’s first president upon formation in 1950, 15-time major champion, and yes: the woman who taught Peggy Kirk to shape her shot. 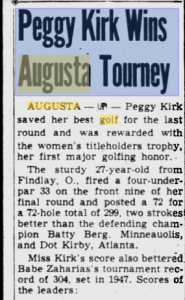 Her stellar performance was the best in the field and set a Titleholders Championship record for the best total score at the time. The win at Augusta Country Club was her third in the 1949 campaign and the most coveted of her amateur (and professional) career.

Early on, Peggy Kirk was inspired by one person in particular: Glenna Collett-Vare. Collett-Vare, another member Peggy joins in the World Golf Hall of Fame, was one of the most dominant amateur golfers in the 1920s and 30s.

She won six U.S. Women’s Amateur Championships, two Canadian Women’s Amateurs and a French Women’s Amateur in the era prior to the LPGA’s existence. Peggy’s admiration for Collett-Vare was beyond inspiration, she idolized the amateur legend.

If you recall from earlier on, Peggy’s one goal was to compete in a Curtis Cup. In 1950, following another win at the Eastern Amateur Championship, her dreams collided with her idol in the perfect storm.

Serving as captain of the United States team, Collett-Vare selected Peggy Kirk to represent her country in the 1950 Curtis Cup at Buffalo Country Club. The night before Peggy was set to compete, she – like any other human being at some point in life – was struck by unshakable nerves.

Afraid of losing the match, Peggy approached her idol and captain requesting not to play the following day. Collett-Vare looked directly at Peggy’s quivering demeanor and declared, “I’m the captain and you’re playing”, bringing the brief discussion to an abrupt close.

The next day, as Peggy walked the 17th fairway one-down in her match, Collett-Vare called her over to the side to ask how she was doing. Upon informing her hero-turned-captain that she was down one, Collett-Vare handed Peggy a four-leaf clover and said, “go get her.”

Peggy proceeded to even-up the match heading to the 18th and final hole. Her second shot landed on the green and stymied her opponent. At that time in match play, if one player’s ball landed directly in front of their opponent’s ball on the green (blocking their path to the hole) and the two sat more than six inches apart, the ball closest to the hole (and blocking the opponents path to the hole) was not lifted. This was known as a stymie.

Having also made the green in two strokes, her opponent was forced to put around Peggy’s ball. In a miracle act of luck – and possibly fueled by her captain’s four-leaf clover – Peggy won the match and her United States team took home the 1950 Curtis Cup. Goal accomplished. Dream fulfilled.

For the Love of the Game

Early in her career, playing the game for money was not an option. In 1950, one year after her lone major championship win and the same year of her magical finish in the Curtis Cup, 13 prominent female golfers banded together to form the Ladies Professional Golf Association (LPGA). With her success on the amateur circuit, Peggy Kirk was more than qualified to be a professional. But she didn’t want to. It was only after her friend and founding member of the LPGA, Babe Zaharias, convinced her to join.

Zaharias was a trailblazer in her own right. A former Olympic athlete, Babe competed in several PGA events after being denied amateur status in golf. Zaharias was the first woman ever to compete in an event on the men’s tour, and as one of Peggy’s closest friends, she knew the Ohio native had the same mindset as the founding members.

In the midst of her success, Peggy Kirk became a charter member of the LPGA. She was named to the 1951 LPGA Weathervane Team alongside Patty Berg. She was never motivated by the idea of earning money as a professional. She played for the love of the game.

The earliest years of the LPGA’s existence were far from glorious. The travel schedule was intense and the means of transportation were limited. Players would often carpool and split travel costs in their lengthy road trips to the next stop on tour. Taking off in the warm Florida winter, the tour wound around the country in a sporadically strategic route that culminated – approximately 40,000 miles and countless roadblocks later – in California.

Peggy was never one to settle. When she sliced her first three balls into the woods, she actively reached out for an instructor.  When she understood that her talent was extraordinary, she made the jump and entered the amateur circuit. So, not content to travel in less-than desirable conditions, she reached high into the sky for an alternative solution.

Fascinated by flight from an early age, Peggy hoped to join the Women’s Air Force Services in the midst of World War II. Though the war ended before she was able to, the intolerable travel conditions on tour renewed her desire to soar through the air.

Dreading a cross-country road trip from New Orleans to California, Peggy voiced her displeasure to fellow tour member, Gloria Armstrong – who owned her own airplane. Armstrong persuaded Peggy to take matters into her own hands, offering to teach her for free. The only downside: Peggy didn’t own a plane.

Not a problem! The following week, Peggy wrote a check for $8,000 to purchase a four-seat, single-engine airplane. In the coming weeks, with the help of Armstrong’s free instruction paired with additional lessons, Peggy ditched her lifestyle of misery on the road for the freedom to fly miles high in the sky, the first professional golfer – male or female – to travel to tournaments in the pilot’s seat. From there on out, she would fly to all of her events – accompanied, on occasion, by Babe Zharias and other friends.

After purchasing Pine Needles Lodge and Golf Club, Peggy would slap the resort’s name on the side of her plane – on display for the world to see. The club would provide a golfing experience unlike any other and become home for Peggy and the Bell family. More than that, it was the venue where Peggy would transform her legacy through her greatest strength (unbeknownst to her at first): teaching.

In the penultimate installment of our four-part series, we’ll follow Peggy’s post-tour flight path into a historic career as an instructor. Stay tuned!

Founded in 2007 by the Triad Youth Golf Foundation, a non-profit 501(c)(3) charitable organization, as a local girls’ golf tour in the Triad region of North Carolina, the tour began as a simple concept: create more effective competitive playing opportunities for girls. By utilizing innovative yardage-based divisions instead of the traditional age-based format, the tour focused on developing tournament experience at the player’s pace. The 2019 season will feature over 90 tournaments in 9 states on the East Coast and with over 900 members, the PKBGT is the largest girl’s only tour in the country.  Learn more about the PKBGT at http://www.pkbgt.org/.