PKBGT Spring Prep Preview Invitational
The Canadian Anne-Lea Lavoie (Quebec, Canada 2023) outlasts two late afternoon charges to claim her third PKBGT National Series title at Wachesaw Plantation Club in Murrels Inlet, SC. Lavoie, the winner of the Campbell Girls Classic and the Eastern NC Girls Classic, held the overnight lead after firing the lone round under par on a windy Saturday. She finished the day at (-1). Lavoie held onto the solo lead thru 26 holes. A costly lip-out brought on nine jumped Garland Gould (Raleigh, NC 2024) into a tie with Lavoie. Playing in the group ahead of Anne-Lea and Garland, Yedam Lee (Lawrenceville, GA 2021) put together quite a final round, shooting the only round in red figures on Sunday and matched Lavoie’s opening round score of 71. On the par-three seventeenth, an errant tee ball dropped Lee out of a tie for the lead after making double-bogey. Lavoie finished in style, making birdie on the last for a three-shot victory. Lee grabbed the silver medal, and Garland Gould tabbed the bronze.
This event marked the end of the Prep Preview Series for the 2021 National Schedule. Garland Gould (Raleigh, NC 2024) was awarded the Prep Order of Merit trophy on Sunday evening, thanks to her outstanding play all season long. To read a full recap about the Order of Merit Race, visit the bottom of the blog.

Mid-Atlantic Girls Championship presented by MAPGA & MSGA
The PKBGT returned to the LPGA Championship’s former site for the 2021 edition of the Mid-Atlantic Girls Championship. Bulle Rock Golf Club, site of an LPGA Major Championship for five years, offered a challenging test for the region’s best.
Maria Atwood (Holly Springs, NC 2022) followed her second round from the PKBGT Spring Bell Invitational with two more excellent rounds of golf to capture the Mid-Atlantic Girls Championship by three. Atwood, the only player in the Bell Field to stay in the red figures, opened the Mid-Atlantic Girls Championship with a round of 70 (-2). Atwood’s final round started sluggish with two bogeys in her first seven holes. The JMU commit quickly turned things around, finishing the final 11 holes in (-2) for a final round 72 (E). Irene Kim (Woodstock, MD 2026) made the biggest move on Sunday, closing out the MAG with a final round 68 (-4) to propel her way into the runner-up position defeating Kiera Bartholomew (Wake Forest, NC 2023) in the scorecard playoff. Atwood takes over the top spot in the PKBGT Bell National Order of Merit rankings heading into the meat of the 2021 season.
Vidhi Lakhawala (Kendall Park, NJ 2026) made quite a PKBGT debut at the Mid-Atlantic Girls Championship at Bulle Rock Golf Club in Harve de Grace, MD. The Kendall Park, NJ native, opened the tournament with a round of 69 (-3), one shot behind Vincenza “Vinny” Papa (Foster, RI 2026) round of 68 (-4). Lakhawala beat Papa by a stroke on Sunday, sending the duo into extras with Lakhawala outlasting Vinny on the second playoff hole. Vidhi made nine birdies over the course of two days, including three straight birdies on holes seven, eight, and nine on Saturday. Lakhawala joins a long list of debut winners this season. Kanchana Duangsam (Haymarket, VA 2026) jumped up into third place, thanks to her final round of 71 (-1). 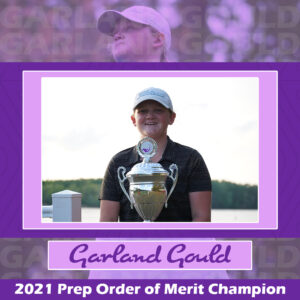 The 16 event Prep Preview Series schedule concluded on Sunday evening with Garland Gould (Raleigh, NC 2024) etching her name in the PKBGT history books. Saving her best golf for the Invitationals, Garland defeated Emerson Dever (Durham, NC 2025) by 1.25 points. Gould, the winner of the 2020 PKBGT Regional Invitational, needed to finish third or better and needed some help from Dever to jump to the top of the rankings. All of the pieces fell into place for Gould, who put herself into contention on Sunday and finished solo third with a birdie on the eighteenth to capture the title.