The 2020-2021 PKBGT National Series is nearing its conclusion, after a heated season of play. Of the forty-five event season spanning across eight states, only four tournaments remain. Bell National and Futures National Order of Merit champions will be determined in this short time frame.  Though there is plenty of exciting golf yet to be played in the current season, the 2022 tour looms just around the corner.

Today, the Peggy Kirk Bell Girls’ Golf Tour is excited to release the National Schedule for the Fall 2o21 and Winter 2022! The strongest fields on the tour will be welcomed back again at some of the best facilities the East Coast has to offer, and an exciting new stretch of inaugural fall events at facilities in regions previously not seen in the fall and winter season.

Teeing off in seven states in the Southeast and Mid-Atlantic region, the fall and winter calendar features stops at some of the most decorated golf facilities, golf getaway destinations, host facilities of USGA sanctioned events, and Ms. Bell’s trio of Southern Pines golf retreats. From the Peach State to the land of our nation’s founders, here’s where next season begins!

Hot off the Press! Four new Classics hit the streets to kick off the national season

The season will kick-off October 2-3 outside Atlanta, Georgia at a facility to be named soon.  Making its debut this season is the Central NC Classic at Anderson Creek Golf Club. A Davis Love III designed 18-hole championship routing is known by many as “golf in the pines”. The first of four new classic events will take place on October 9-10 in Spring Lake, NC.

The following week the tour heads to Maryland for the Woodholme Girls Classic at Woodholme Country Club in Pikesville, MD. Woodholme CC, designed by Herbert Strong, is considered one of the pillars of the “golden age of golf design”. Originally routed in 1927, Woodholme is a exclusive club the girls will thoroughly enjoy to play!

A new national event will also debut in the Bluegrass state at Griffin Gate Golf Club in late October.

Before the ball drops on 2022, the PKBGT will close out the year with a return trip to Southern Pines and Pine Needles Lodge & GC, the home course of the late Peggy Kirk Bell, our tour matriarch.  Pine Needles has hosted 3 U.S. Women’s Open and set to host a 4th in two years.  This Championship venue is a great way to end the year on a bright spot, including a great holiday tradition staying at the Lodge and experience all the charm of classic Pinehurst on and off the course. The PKBGT will also be using the latest Ross Resort facility, Southern Pines Golf Club as a secondary site once again this season. Southern Pines is completing an extensive redesign this summer which will be a treat for the Futures National field in December. 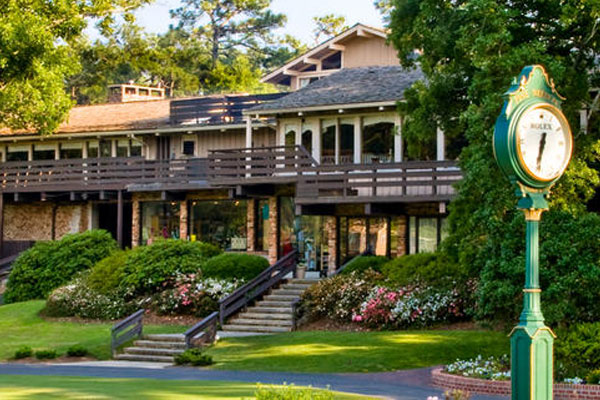 Several PKBGT Invitational events return in the 2021-2022 season, headlined by the the 13th PKBGT Invitational (Nov. 6-8). Bermuda Run Country Club plays host to the tour’s premier event for the fourth consecutive year. Bermuda Run is fresh off of hosting the first stages of the PGA Tour Qualifying Series.  Last season’s event ranked inside the top 25 in strength of field for junior girls events in the country during 2020!  Find out how to qualify at the official PKBGT Invitational page.

Don’t fret, the 2022 PKBGT schedule is not without the hits!  The PKBGT trek through the university courses across the East Coast resumes in February 2022.  Planned events at player favorites University of Georgia Golf Course, the Walker Course at Clemson University and the UNC Finley Golf Course complete the annual early-spring run of Division 1 caliber challenges.  The late winter/spring 2022 national schedule will release early this Fall.

Get a head start on the competition

Oh, the places you’ll go! Now that you know where we’ll be headed at the start of the next PKBGT season, it’s time to get cracking on preparation for the new season!  There’s no better time than now to begin mapping out your 2021-2022 tournament route and considering which events you want to compete in.

Another year on the PKBGT is set to be the biggest one yet! We are proud to serve as the nation’s largest girls-only tour and we’re constantly expanding. If you know someone who would benefit from the challenge of all-girls competition on the course and quality friendships off the course, send them our way so they can take part in the 2021-2022 season!

Founded in 2007 by Girls Golf of America, a non-profit 501(c)(3) charitable organization, as a local girls’ golf tour and LPGA-USGA Girls Golf program in the Triad region of North Carolina.  The tour began as a simple concept: create more effective competitive playing opportunities for girls. By utilizing innovative yardage-based divisions instead of the traditional age-based format, the tour focuses on developing tournament experiences at the players pace. In 2021, the PKBGT will feature over 1,000 members and operate over 130 tournaments in 11 states across the East Coast and Midwest.  PKBGT championship events rank as some of the top 100 ranked girls’ events in country.  Learn more about the PKBGT at pkbgt.org.