Greensboro, NC- The Peggy Kirk Bell Girls Golf Tour concluded its thirteenth season of tournament play this weekend at the Tour Championship at Ms. Bell’s Pine Needles Inn and Club. Two names joined Grace Ridenour (Cary, NC 2025) as Order of Merit champions of the 2019-2020 wrap around season after the final round of the Tour Championship. 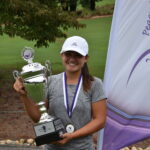 It was a three-person horserace heading into TC between Sydney Hackett (Ashburn, VA 2022), Maria Atwood (Holly Springs, NC 2022), and Melanie Walker (Burke, VA 2022). After two days of play, three scenarios had the potential to play out on Sunday at a US Open course. For Melaine Walker to walk away with the crown, Hacket had to finish solo 18th, and Atwood needed to finish solo 13th or worse. For Hackett and Atwood, win, and you’re forever etched into PKBGT history. One other scenario where Atwood finishes solo second, Sydney Hackett needed to finish higher than eighth, Atwood would be the OOM champion.

At the end of the day, Hackett and Atwood finished tied for fourth at (+9) for three days giving enough points for the OOM leader Sydney Hackett to put her mark on the PKB history books. Hackett, winner of the final Bell National event before the suspension of play due to the Coronavirus pandemic at the Tarheel Classic, was one of the most consistent Bell players all year long included three top-five finishes. 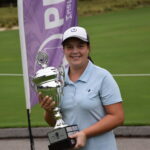 Prior to the first tee shot of Kathryn Ha (Roanoke, VA 2025), Madison Messimer (Myrtle Beach, SC 2025) and Emerson Dever (Durham, NC 2025) at the Tour Championship, there were quite a few scenarios that could play out to see Ha, Messimer or Dever atop the OOM rankings after the 54 championship event. However, the hottest player on the PKB circuit ended the event where she started, atop the Order of Merit Rankings. Madison finished the season on a five tournament win streak with four of those being major championship victories. Messimer was the lone competitor in the Futures field to fire a round under par at TC.

Messimer’s scoring average was 74.63 in the Futures tournament events over nine rounds.

Founded in 2007 by Girls Golf of America, a non-profit 501(c)(3) charitable organization, as a local girls’ golf tour in the Triad region of North Carolina.  The tour began as a simple concept: create more effective competitive playing opportunities for girls. By utilizing innovative yardage-based divisions instead of the traditional age-based format, the tour focused on developing tournament experience at the player’s pace. The 2020 season will feature over 1110 tournaments in 9 states on the East Coast, and with over 1,000 members, the PKBGT is the largest girl’s only tour in the country.  Learn more about the PKBGT at http://www.pkbgt.org/.