Greensboro, NC- The Peggy Kirk Bell Girls Golf Tour is pleased to announce the hiring of Michael Gibbons to the Golf Operations Staff as a National Tournament Director. 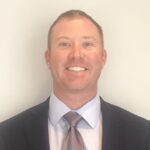 Mike is a native of Pittsburgh, Pennsylvania, and a graduate of Slippery Rock University, where he received his undergraduate degree in Sport Management. Mike continued his education at the University of Southern Mississippi, where he received his Masters of Business Administration with a Sports Management concentration. Mike brings over twelve years of experience in golf tournament administration and event operations to the Peggy Kirk Bell Girls Golf Tour.

Mike has worked with some of the nation’s best professional golf tours, including the Symetra Tour, the All-Pro Tour (APT), and the Women’s All-Pro Tour (WAPT) out of Texas, as well as the PGA Tour. Mike also spent time with the United States Golf Association, where he worked in event operations and as a professional rules official.

Before joining the PKBGT, Mike worked as an operations manager at the Triangle Aquatics Center in Raleigh, North Carolina. Mike is excited to begin his first official week with the PKBGT and looks forward to spending the season with the PKB members and their families.