Greensboro, NC- The Peggy Kirk Bell Girls Golf Tour is pleased to announce the hiring of Killian Casson to the Golf Operations Staff as a National Tournament Director. 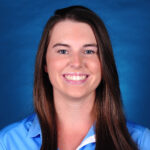 Killian is a native of southeastern Michigan and a graduate of the University of North Carolina at Chapel Hill, where she received her undergraduate degree in Communications and Political Science with a focus in marketing.

A member of the UNC Women’s Golf program for two years, a Maryland Junior State Champion, and no stranger to the Peggy Kirk Bell Girls’ Golf Tour brings years of collegiate and junior golf experiences to the tour.

Casson currently resides at the home of golf for the Carolinas, Pinehurst, North Carolina. Before joining the PKBGT staff, Killian worked in event management for Hyatt Corporation and the UNC Kenan Flagler Business School in Chapel Hill.

Killian is “excited to be working for a tour that helped me shape me as a player, and that does so much to promote girls golf.” She is amazed at how far the tour has grown since Killian was a tour member, and is looking forward to honoring Ms. Bell as a National Tournament Director.

Shelby Osiecki, our Director of Tournament Operations, finished her last week with the PKB Girl’s Golf Tour on Friday. Although Shelby will be greatly missed, we are excited for her to begin her next step in her professional development with Sea Island Hospitality.

Founded in 2007 by Girls Golf of America, a non-profit 501(c)(3) charitable organization, as a local girls’ golf tour in the Triad region of North Carolina.  The tour began as a simple concept: create more effective competitive playing opportunities for girls. By utilizing innovative yardage-based divisions instead of the traditional age-based format, the tour focused on developing tournament experience at the player’s pace. The 2020-21 season will feature over 110 tournaments in 10 states on the East Coast, and with over 1,000 members, the PKBGT is the largest girl’s only tour in the country.  Learn more about the PKBGT at http://www.pkbgt.org/.