Greensboro, NC- The Peggy Kirk Bell Girls Golf Tour is pleased to announce the hiring of Erika Hallmark to our Golf Operations Staff as a Tournament Director. 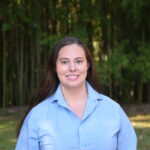 Erika is a native of Clovis, California, and a graduate of Methodist University, where she received her undergraduate degree in Business Administration with a PGA Golf Management concentration.

Hallmark currently resides in Kannapolis, NC. Along with her responsibilities with the PKB Girls Tour, Erika is the Vice President of the nonprofit organization Parent Advocates 4 Youth Sports and the Executive Director of the Kids 4 Junior Golf Tour in Northern California.

Erika is looking forward to the Invitational schedule and the 2021 wraparound season!

Founded in 2007 by Girls Golf of America, a non-profit 501(c)(3) charitable organization, as a local girls’ golf tour in the Triad region of North Carolina.  The tour began as a simple concept: create more effective competitive playing opportunities for girls. By utilizing innovative yardage-based divisions instead of the traditional age-based format, the tour focused on developing tournament experience at the player’s pace. The 2020-21 season will feature over 110 tournaments in 10 states on the East Coast, and with over 1,000 members, the PKBGT is the largest girl’s only tour in the country.  Learn more about the PKBGT at http://www.pkbgt.org/.