Home/"Talking Girls' Golf", Tour News/Teeing it Up With the Boys: Gracie Song Set to Compete at PGA Jr. League National Championship
Previous Next

September 22nd was a warm fall day at Springfield Golf and Country Club when the Charlotte 3 All-Stars team teed it up to compete in a PGA Junior League Regional – with dreams of boarding a plane to Arizona for the National Championship the following month.

Ten players, all dressed in bright orange shirts, warmed up for their matches that Sunday. But watching the players, one stood out – dressed the same, but with a pony tail.

That competitor was PKBGT member Gracie Song, who was the only girl on the Charlotte 3 All-Stars team. The squad went on to win their matches and advanced to the coveted PGA Jr. League National Championship presented by National Car Rental, held this week at Grayhawk Golf Club in Flagstaff, AZ.

Song, a force to be reckoned with on the PKBGT’s Discovery Series, joined her local PGA Junior League team at the beginning of the year to play alongside her friend. She noted that at the local level, the league was a fun way to get out and play in a team environment – but as her team advanced to sectionals, regionals and now the Championship level, they became more competitive.

“Once we got to Virginia for regionals, we were excited to make it there but we wanted to get to the national championship, and our team was focused.”

PGA Junior League, an initiative to get more kids playing competitive golf – but in a fun, team environment, brings together over 40,000 players each year. The National Championship played this week brings the top 80 of these 40,000 to compete and represent their state.

Not only is Song the only girl representing Team North Carolina this week, but she is the FIRST girl from North Carolina to compete in the National Championship event! Song noted that although she may not have as much distance off the tee as the boys, her accuracy and short game makes up for it.

“It feels really good to be the only girl on a team of boys because there were many competitive players this season that played to be on this team – and to show that girls can play as well as the boys,” said Song. 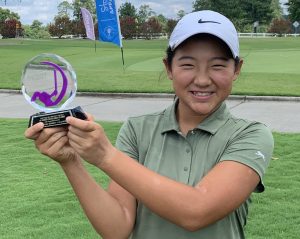 This week won’t be Song’s first time competing on a national stage. This past summer, she competed in the widely known US Kids World Championships where she took 6th place in the Girls 11 division.

Song is also a regular on the PKBGT Discovery Series – taking home both the North Carolina and Southeast Series Order of Merit titles this season after averaging 33.67 and 36, respectively. In addition, Song earned eight event titles, including a victory on the Central Florida Series at Walt Disney World’s Lake Buena Vista Golf Course.

But beginning this fall, Song becomes age eligible to compete on the PKBGT National circuit where she will start off playing in the Futures National division.

“My goals are to keep working hard and play my best to win some of the tournaments in the Futures Division,” said Song. “I’m looking forward to playing with some of my friends from the Discovery Division.”

Until then, Song will look to be crowned a National Champion in Flagstaff! Wishing best of luck to Gracie and Team North Carolina this week! To follow Gracie and her team this week, click here. Play starts tomorrow, October 11th.