Bright Futures: Rivalry and friendship intertwine on the PKBGT

Home/Tour News/Bright Futures: Rivalry and friendship intertwine on the PKBGT
Previous Next

Bright Futures: Rivalry and friendship intertwine on the PKBGT

Walking down the final fairway of a two-day, thirty-six hole competition at the Wolfpack Classic, Ellen Yu (High Point, NC 2026) and Grace Ridenour (Cary, NC 2025) were locked in a dead-heat for first place. Neither player old enough to drive a cart around Lonnie Poole, yet their matching scores of one-under-par indicated a level of play wise beyond their years.

This wasn’t the first showdown between the duo and it won’t be the last. Entering this weekend’s PKBGT Tour Championship, Ellen and Grace rank second and third, respectively, on the Futures National Order of Merit (To read a full breakdown of the Order of Merit race, CLICK HERE). The pair embody the promising future of the PKBGT and LPGA-USGA Girls’ Golf.

In fact, the competition (and friendship) between Ellen and Grace dates back to 2016 when the two first met. At nine and ten-year-olds respectively, they paired up in the home of U.S. golf: Pinehurst, North Carolina.

At a U.S. Kids Golf local tour event, Grace remembers the lighthearted happiness Ellen exuded, noting, “I remembered that she smiled the entire tournament.” For the duration of that event, Ellen’s vibrant smile was painted across her face and things have not changed over the past three years.

Behind the smiles, the rivalry’s early stages were one-sided from Ellen’s point of view. “My first memory was Grace beating me at all the local tournaments,” she recalls.  Regardless of their outcome, those U.S. Kids Golf local events introduced two highly talented junior girls’ golfers with bright futures.

Now, both girls are approaching the end of their first season on the PKBGT’s National Series competing in the Futures division. The pair has provided Futures National fans with a handful of awe-inspiring rounds when competing side-by-side in the same pairing.

Though the competition is stiff, Ellen and Grace relish the opportunity to play in the same pairing. Grace describes a round of golf with Ellen as “very relaxed and stress-free” because she makes the round of golf an enjoyable experience.

Now, you may wonder if those feelings remain the same during a winner-take-all final round? Not quite. “It’s a lot more intense if the trophy is on the line and we both get more intense.” That happy-go-lucky Ellen Yu smile transforms into a locked-in, focused look of sheer determination. Grace matches Ellen with a stern look of unshakable focus and the two battle it out for first place.

Memories on and off the course

Win or lose, after the final putt falls in the cup, Ellen and Grace are grateful to have formed a valuable friendship off the course. At this past year’s U.S. Women’s Open in Charleston, the two ran into each other. They spent the afternoon getting autographs from the professionals and watching an event they hope to one day take part in. 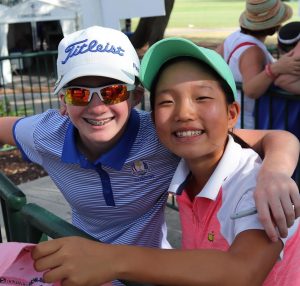 Grace and Ellen at this year’s U.S. Women’s Open in Charleston.

As they each lined up lengthy par putts in Raleigh several weeks back, the PKBGT Wolfpack Classic championship lay on the line. Ellen drained her attempt, forcing Grace to do the same in order to force a playoff. She did. One-under-par through two rounds.

Ellen defeated Grace on the first tiebreaker playoff hole and brought home the championship trophy. But the event is another chapter in the book of Ellen and Grace’s junior golf career. A piece of literature that’s just beginning.

While her favorite memory of playing with Ellen is that dramatic Wolfpack Classic, she looks forward to more battles playing together in tournaments for years to come. “Ellen and I have a lot of fun on the golf course, and I hope that we have more fun as we both grow as players,” says Grace.

Ellen’s favorite memory of their relationship swings back to this year’s Carolina’s Classic, where Grace and she were putting on the practice green.

She said, “Grace kept bending over for each putt and I asked her what she was doing.” Turns out Grace was doing the “Ellen birdie putt”, mimicking the way Ellen bends over for all of her crucial putts. “We always have a good laugh with that.”

As with Grace, Ellen anticipates many more exciting tournaments and memories in their friendly rivalry. 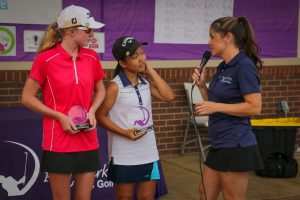 Ellen and Grace mid-interview after a tiebreaker playoff finish at the 2019 PKBGT Wolfpack Classic.

The Futures division is bright

Ellen and Grace’s journey has just begun, but they provide one example of the incredible talent on the PKBGT and LPGA-USGA Girls Golf and the meaningful relationships formed in their junior girls’ golf experience!

We look forward to closing the 2019 PKBGT National Series with one final showdown and the Futures National Order of Merit championship on the line at this weekend’s PKBGT Tour Championship!