Greensboro, NC–The Peggy Kirk Bell Girls’ Golf Tour was planning to take on Mid Pines Inn and Golf Club on January 15-17, 2022, for the fifth annual Linville Cup Team Challenge and Leadership Retreat but mother nature had other plans!  This event has been rescheduled to July 1-3, 2022 but lets learn about the teams that have earned the right to represent their regions!

The Linville Cup is a weekend of team golf and leadership seminars designed to reward the top players of the 2021 PKBGT in each region. The retreat builds on our motto of “more than a golf tournament” by bringing together members who have excelled in the past year to Pinehurst, the home of American golf, and Pine Needles/Mid Pines GC, the home of our tour namesake.

Mentorship is a major component of the Linville Cup, with multiple opportunities for players to interact with the coaches and staff. We hope that players will take away many life lessons, a stronger sense of confidence, and friendships to build their golfing careers. Our coaches are ex-collegiate golfers as well as women business leaders who share their experiences with the girls. The event provides a unique experience for players to stray away from tournament golf’s individual mentality and compete and develop in a team environment. 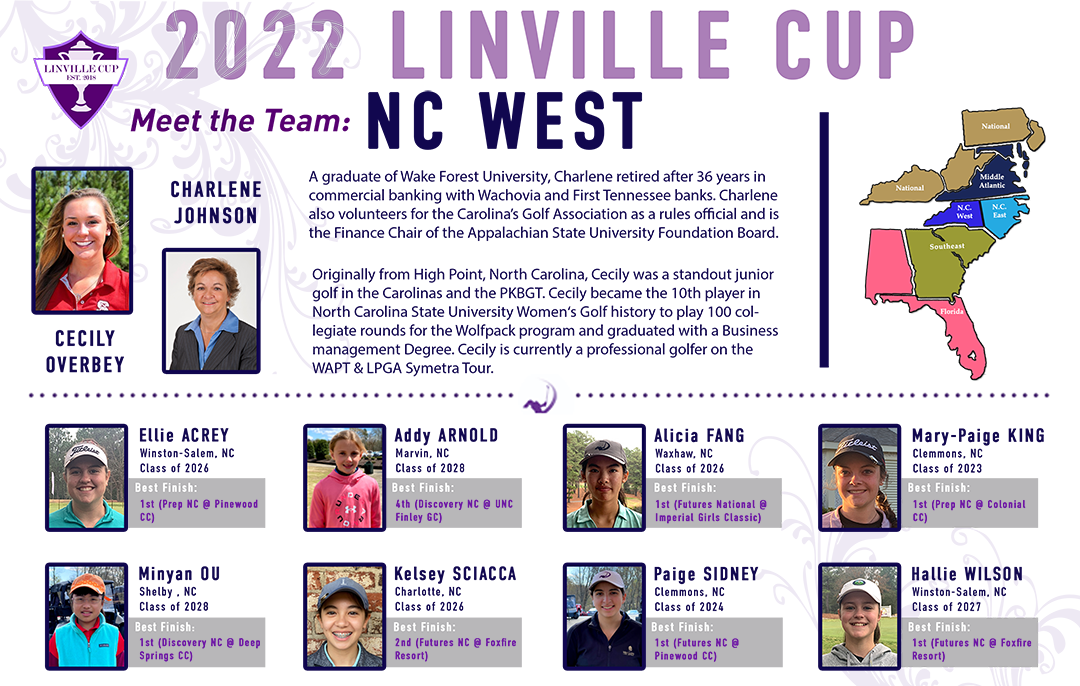 The Linville Cup is named for PKBGT Tour Founder Robert Linville. Robert is the owner/founder of Robert Linville’s Precision Golf School and co-founder of the PKBGT’s parent foundation, the Triad Youth Golf Foundation, now known as Girls Golf of America.  A PGA member for over 30 years, Robert has a passion for developing players and has taught some of the top players to come out of North Carolina in the last 25 years, including current LPGA player and PKBGT Alumnus Katherine Perry. Robert’s passion and energy for developing equity for girls in golf are why the PKBGT has grown to where it is today.

The Peggy Kirk Bell Girls’ Golf Tour is an initiative of Girls Golf of America, a 501(c)3 non-profit foundation aimed at increasing learning and playing opportunities for youth golfers. Based out of Greensboro, North Carolina, the PKBGT offers affordable, high-quality nationally ranked girls’ golf tournaments designed to prepare junior girls’ golfers for high school and collegiate golf. The PKBGT is the nation’s largest “girls’ only” junior tour with over 1,100+ members in 2021 and 1,100+ girls having played, playing in, or committed to playing collegiate golf. Learn more about the tour at pkbgt.org or by contacting Tour Director Mike Parker at mparker@pkbgt.org or 336-347-8537.

About the Author: Taylor Stoy