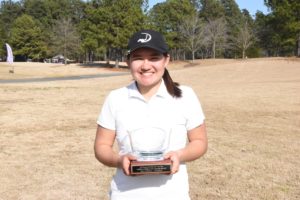 Ashburn, VA– On an overcast spring Sunday afternoon in March, Sydney Hackett (Ashburn, VA 2022) approached the eighteenth green at UNC Finley Golf Course during the final round of the PKBGT Tar Heel Classic needing a birdie. Hackett stepped over the ball, showing no sign of nerves and watched her ball drop into the cup to tie the lead and force a playoff against the Boone, NC native Macy Pate and Mackenzie Gallagher of Hilton Head, SC. Hackett took three holes to be crowned champion, her first Bell National title.

Just five days later, the CDC recommended that all social gatherings of more than ten people be suspended due to the novel Coronavirus (COVID-19), and forced the PKBGT to suspend tournament play indefinitely. Now on week eight of tournament suspension, Sydney wanted to do her part for Girls Golf of America, the foundation that operates the Peggy Kirk Bell Girls’ Golf Tour. 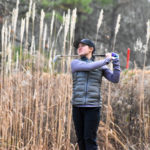 Hackett at the 2019 PKBGT Tournament of Champions

Sydney, her mother Jenny, and her father Eric sprung into action, “This pandemic has caused challenges to all people and businesses around the world, and I wanted to help as much as possible.” Sydney and her mother started by created cloth facemasks, but Sydney soon realized that she could help the tour where just weeks prior Sydney won her first PKBGT National event, “when I learned that PKBGT needed help, I reached out to my family and friends to ask them to donate.” With the bulk of Sydney’s competitive schedule being PKBGT events, Sydney just “couldn’t imagine a season without PKBGT tournaments.”

Like most of our PKBGT members, Sydney got her start in the Futures Division. “I still remember playing in my first PKBGT event at Bowling Green Country Club in the Futures Division. I was so nervous, but I quickly figured out that I could hang with these players”. Sydney captured two Prep titles in 2018 and the PKBGT Masters in 2019 before moving up to the Bell National Division. Hackett continues to succeed at the highest level as well, with her latest victory occurring before the tournament suspension at UNC-Finley against a very talented field. She attributes the PKBGT for her boost in confidence, “PKBGT helped build my confidence by providing me the opportunity to play tougher courses, play longer distances, and play in a competitive field.”

Hackett credits the Peggy Kirk Bell Girls’ Golf Tour for her personal growth, “I have changed so much since I first started on [the PKBGT]. Not only has my golf game improved, but I have grown as a person”. To say that Sidney’s golf game has improved is an understatement! Her tournament scoring average went from 79 when she started on the PKBGT back in 2017 to just under 74 over the past two seasons. One of Sydney’s favorite parts of the PKBGT National Series is the diverse group of girls that compete. “I love being able to catch up with my friends that don’t live nearby, meet new people, and make new friends every tournament.” Out of the PKBGT circuit, Hackett has made lifelong friends and connections.

To donate to Sydney’s campaign and support Girls Golf of America’s mission to actively sustain the growth of girl’s golf by providing a nationwide progression-based competition pathway for girls to develop, compete, and be recognized click here.

Founded in 2007 by Girls Golf of America, a non-profit 501(c)(3) charitable organization, as a local girls’ golf tour in the Triad region of North Carolina.  The tour began as a simple concept: create more effective competitive playing opportunities for girls. By utilizing innovative yardage-based divisions instead of the traditional age-based format, the tour focused on developing tournament experience at the player’s pace. The 2020 season will feature over 110 tournaments in 9 states on the East Coast, and with over 1,000 members, the PKBGT is the largest girl’s only tour in the country.  Learn more about the PKBGT at http://www.pkbgt.org/.