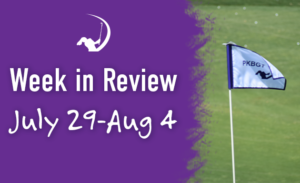 The PKBGT Masters presented by Aunt Ruby’s Peanuts saw some of the best in the region compete for the final major championship event of the summer at Greenville Country Club. Amber Mackiewicz (Virginia Beach, VA 2023) captured the title after battling back from an eight on her front nine during the final round in the Bell Division. Madison Messimer (Myrtle Beach, SC 2025) was the lone competitor in the field to go under par in both rounds, as she captured consecutive majors after winning the Precision Girls Championship last weekend at Bryan Park Golf Club.

To view the recap of the PKBGT Masters presented by Aunt Ruby’s Peanuts, click here.

While the Masters was being held in the Tarheel State, a strong bunch of Mid-Atlantic natives battled it out at the Terrapin Classic at the University of Maryland Golf Course. Taking home gold in the Bell Division was reigning champion Paris Fieldings (Suffolk, VA 2023) after a three-hole playoff. Makayla Grubb (Stafford, VA 2025) finally found paydirt on the National circuit in the Futures National division.

To view the recap of the Terrapin Classic at the University of Maryland, click here.

The PKBGT, in partnership with the Women’s Golf Association of Philadelphia, played the annual Rita Cooper Cup at the historic Bala Golf Club in Philadelphia over the weekend.

Mary Grace Dunnigan (Kennett Square, PA 2023) took home the title at the Rita Cooper Cup in the Prep division after posting a round of 76 (+8) on the par 68 layout at Bala Golf Club. The highlight of Dunnigan’s round occurred on the third hole of each nine where she birdied en route to a four-shot victory over the field. Finishing runner-up was Riley Quartermain (Bryn Mawr, PA 2021).

Avery McCrery (Wilmington, DE 2025) found paydirt once again in the Futures division capturing the gold with her round of 75 (+7). This is McCrery’s third straight victory. Finishing second in the Futures Divison was Kayley Roberts (Phoenixville, PA 2026) at (+14).

The NC Series continued play in the Queen City at Pinewood Country Club, thankfully weather did not play a factor in the results as thunderstorms have severely impacted the past three NC Series events.

Katelyn Kenthack (Southern Pines, NC 2020) took home the gold at Pine Island Country Club after her hot final nine 36 (E) with two birdies on her back-nine. Kenthack, a member of the tour since 2014, waiting six years before finally reaching the top pedestal at a regional or national event. Finishing runner-up was Shyla Brown (Matthews, NC 2026) at (+11) 82.

Jasmine Yeung (Charlotte, NC 2025) battled back after a rocky start to capture the Prep Division by two shots. The Queen City, NC native carded a single birdie on her tenth hole. Finishing two strokes behind Yeung was Mary Elizabeth Harrison (Cary, NC 2025) who birdied back-to-back holes on her back-nine to seal the silver after a scorecard playoff over Sanaa Carter (Jacksonville, NC 2025).

A newcomer to the NC Regional Series captured the Discovery title. The Big Apple native, Jennifer Qianqi Wang (New York, NY 2027) trotted down to the Carolina’s and shot the low round of Discovery division to capture her maiden victory as a PKBGT member. Wang birdied the final hole to close the round at (+2) 38. Miraya Lurie (Raleigh, NC 2027) finished runner-up with a round of 40 (+4).

In the Prep Division, Kylie Bowes (Bluffton, SC 2022) ran away with the title after her round of 75 (+3) with two birds on her card. Her nearest competitor Jennifer Rials (Florence, SC 2022) ended five shots behind the southern coast of SC native. Bowes captured the Prep Preview title at the Disney Girls Classic back in early January.

It was a three-way tie at the conclusion of the Futures Division at Spring Valley County Club. Payton Burch (Elgin, SC 2023)  & Grayson Bonner (Mount Pleasant, SC 2024), and Madilyn Saxton (Guyton, GA 2025) fired rounds of 78 (+6). The Elgin, SC native won in a scorecard playoff with a par on the eighteenth hole, Saxton took second and Bonner rounded out the top three.

Just like the Futures Division, the Discovery title was determined through a scorecard playoff. Mary Katherine Dutcher (Sumter, SC 2027), and Karsyn Herron (Graniteville, SC 2027) both fired rounds of (+4) 40. Herron took home the gold to capture her third Discovery title on the year after winning the scorecard playoff. Finishing third was Rebecca Wohn (Bluffton, SC 2026).

The Delaware Valley series, in partnership with the Kentucky PGA Section, continued play at the University Club of Arlington, the home course of EKU Women’s Golf and home to the Raising Cane’s Invitational.

In a small field, Emerson Purcell (New Albany, OH 2024) rode into the pastures with the title after her round of 80 (+8). Finishing runner-up was Elivia Marcum (Manchester, KY 2022).

A par on the seventeenth hole proved to be the difference in the Futures Division. Kasey Cameron (Richmond, KY 2024), the local won, by a slim one-stroke margin to capture the Futures title over Cailyn Rogers (Lexington, KY 2025). Cameron closed the day at (+9).

Another Emerson walked home with the top honor at UC Club of Arlington in the Discovery Division. Emerson Bowling (Frankfort, KY 2028) after her round of 42 (+6). Bowling carded two birds during her round. Finishing runner-up was Brooklyn Hillman (Berea, KY 2026) at 44 (+8).