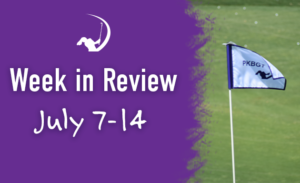 The Peggy Kirk Bell Girls’ Golf Tour hosted events in six different states over the past week including the start of the Kentucky Regional Series and the resumption of play in the Delaware Valley.

-Capturing titles at the Carolina’s Classic was Hannah Lydic (Ocean View, DE 2022) in the Bell Division and Kathryn Ha (Roanoke, VA 2025) in the Futures National Division. Lydic overcame a significant stroke differential to claim her first PKBGT title, and Ha continued her fine play over the course of the two days.

To view the recap from the Carolina’s Classic, click here.

To view the recap from the Wolfpack Classic, click here.

To view the recap from the Commonwealth Classic, click here.

The PKBGT in partnership with the Women’s Golf Association of Philadelphia hosted the WGAP Girls Championship at Sandy Run Country Club on July 7-8.  This event was the 2nd event of the PKBGT Delaware Valley Series in 2020.

In the Futures Division, Avery McCrery (Wilmington, DE 2025) ran away with the title by an astounding ten shots! Avery fired the low rounds on both days and was the lone player to break 80. The Wilmington, DE native carded three birdies over the course of two days. Taking second was Rachel Joyce (Quakertown, PA 2026).

The PKBGT South Carolina Series resumed play at the Carolina Country Club in Spartanburg, SC, and was it a hot one!

In the Prep Division, it came down to the final hole to determine the champion as Abby Franks (Roebuck, SC 2023) and Caitlyn Cash (Chesnee, SC 2020) were tied at (+7) as they hit their tee ball on the eighteenth hole. When the final putt dropped into the hole, it was Abby Franks who claimed victory as she made par on the last hole to remain at (+7) for the round. Anika Rana (Duncan, SC 2021), the clubhouse leader before Franks signed her card, finished runner-up after winning the scorecard playoff over Cash.

Two Peach State natives kept their names atop the leaderboard in the Futures Division at Carolina Country Club. Kathryn DeLoach (Athens, GA 2026), new to the PKB Girls Tour, has done what very few have done on the tour. Capture their maiden victory in their first start. DeLoach fired a one day total of (+7) to clear the field by three strokes. Finishing runner-up was Emerson Elm (Suwanee, GA 2025) at (+10).

Two youngsters are once again tearing up the Discovery rankings and battling it out over nine holes. Landry Hamm (Charlotte, NC 2027) and Riley Grimm (Pinehurst, NC 2028) finished their rounds tied at (+3). Following PKBGT Regional playoff procedures, Riley Grimm won the scorecard playoff with a lower score on the ninth hole. Keep an eye out for these two as they continue their way up the PKBGT rankings and divisions!

Much to Celebrate at Celebration

The Central Florida series completed it’s the final event before the finale at Alaqua Country Club over the weekend at stunning Celebration Golf Club. Torrential downpour kept the girls off the golf course for a number of hours before eventually concluding play just before sunset.

A fantastic round by Andrea Woods (Riverview, FL 2023) that included three birds on her back-nine propelled Andrea into the winner’s circle in the Prep Division. Andrea finished the day with a season-low score of 74 (+2). Woods faired much better after the rain delay than the rest of the field. Finishing runner-up was Abigail Fernandez (Windermere, FL 2023).  Both Woods and Fernandez are the only two Prep members to find paydirt in the CFL Series presented by the IOA Golf Classic this season.

To view the photo album from the event, click here. (Photo album will be posted to Facebook on Friday afternoon)

Hitting Shots on the Dock at the Bay

The Prep Division saw a tour regular, and hometown product atop the leaderboard after the conclusion of eighteen holes. Elizabeth Eberle (Richmond, KY 2023) carded fourteen pars, two birdies and two bogeys en route to an even-par (72) to capture her first PKB Girls Tour Regional title. In all three events Elizabeth has played this season, The Richmond native has finished inside the top ten. Finishing runner-up was Emerson Purcell (New Albany, OH 2024) at (+6).

Two were tied atop the scoreboard in the Futures Division at (+10) for the event. Kasey Cameron (Richmond, KY 2024) and Jane Stilz (Lexington, KY 2022) both signed for rounds of 82 in their first KY Series event. Following regional playoff procedures, Kasey took home the first place trophy thanks to a birdie on the par-five sixteenth hole.

Just like the Futures, Brooklyn Hillman (Berea, KY 2026) and Macy Pendergrass (Richmond, KY 2027) were tied after the conclusion of their nine-hole rounds. Both Bluegrass natives fired rounds of (+8). Following regional playoff procedures, Macy Pendergrass took home the first-place medal with her birdie on the final hole.

The North Carolina Series was back on island time on Monday at Pine Island Country Club in Charlotte, NC. A field of over seventy players battled the hot and steamy conditions on a course that demands much of you off the tee.

Fresh off a National Series victory at the Carolina’s Classic, Sophie Lauture (Charlotte, NC 2024) followed with another title thanks to her round of 76 (+4) to capture the title by one stroke over Elizabeth Rudisill (Charlotte, NC 2025). Lauture carded one birdie on the round.

An eagle on the par-four twelfth and two birdies on the back-nine propelled Madison Myers (Cary, NC 2025) to paydirt. The Cary, NC native carded a round of 78 (+6) to take the title by a stroke over Katherine Mann (Fort Mill, SC 2023). This is Myers first PKBGT title of her career.

Two of the rising-stars on the PKB Girls Tour circuit battled it out once again at Pine Island CC. Riley Grimm (Pinehurst, NC 2028) and Landry Hamm (Charlotte, NC 2027) closed the day tied at (+2) for the tournament. A bogey on the last kept Hamm away from the winner’s medal as Riley Grimm won in the scorecard playoff. It’s been fun to watch these two friends battle it out over nine holes and then smile after their rounds these past four weeks!