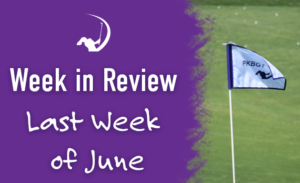 The Peggy Kirk Bell Girls’ Golf Tour hosted events in four different states over the past week including three Regional Series events in North Carolina, Maryland, and Pennsylvania to close out the month of June.

In the series opener for the Delaware Valley regional series, a field of twenty-six met at Meadia Heights Golf Club in Lancaster, Pennsylvania.

In the Prep Division, Megan Meng (Pennington, NJ 2024) took home medalist honors firing a smooth round of even-par (72). The New Jersey native fired a (-2) front nine and totaled four birdies on the round. This was Megan’s maiden victory on the PKB Girls Tour since she joined back in 2019. Meng won by a five-stroke margin. Finishing runner-up at (+5) was Angelina Tolentino (Mount Laurel, NJ 2024).

Kiersten Bodge (West Chester, PA 2027) claimed gold in a packed field of eleven in the Discovery division. Bodge carded one birdie on her round finishing at (+4). The West Chester, PA native won by an astounding six strokes. With the win, Kiersten claims a spot in the PKBGT Discovery Tournament of Champions. Bryn Krosse (York, PA 2030) finished runner-up at 46 (+10).

Crofton Up Some Good Scores

The PKBGT Middle Atlantic Series concluded the second event of the schedule at Crofton Country Club in Crofton, Maryland. A field of nearly 70 competitors took on a late afternoon downpour before completing their rounds in darkness. A vet and two newcomers were eventually crowned just before 9 PM EST.

Alice Zou (Potomac, MD 2022) captured the Prep title in a very talented and bunched field of seventeen. Zou’s back-nine included two birdies en route to a (+3) round of 75. Zou’s last victory came back in 2019 at Hanover Country Club. Finishing just one shot behind Zou was Josephine Nguyen (Springfield, VA 2024), signing her card at (+4). Josephine was the clubhouse leader for nearly every group before Zou left the 18th green in the final group.

In the Futures National division, the twenty-two players had to race the sun to complete their rounds due to a surprise downpour. Just like the Prep division, it came down to the wire to determine the champion. A PKB Girls Tour newcomer Cameron Hiek (Great Falls, VA 2023) held the low round of the day, but she needed to wait and see the results of the final three groups to see if she would capture her first PKBGT victory in her first event. When the last stroke was tallied, Hiek walked away with a six-shot win over Jennifer Osborne (Ashburn, VA 2024).

Between two Discovery players, a total of six birdies were carded in their round. Sydney Neou (Leesburg, VA 2027) birdied the first four holes, finishing her round at 34 (-2) for the tournament. Isabel Vizgatis (Alexandria, VA 2028) carded two in her round, and seven pars to also tie for the lead with Neou at (-2). Vizgatis took home first place in the scorecard playoff with a par on the par-five sixth hole.

Can Somebody Close the Gate?

The NC Series was back in action earlier this week for the annual NC Series Gate City Classic at Forest Oaks Country Club in Greensboro, North Carolina. Forest Oaks, a former PGA Tour stop, was in excellent condition, including some of the most difficult green complexes in the Greensboro area.

The Prep division saw a Peach State native capture the two-day title after two rounds of 70 (-2) and 73 (+1) finishing at (-1) for thirty-six holes. Yedam Lee (Lawrenceville, GA 2021) carded seven birdies over two holes en route to the Gate City Classic title. Yedam was just one of two players in the Prep or Futures division to post a score under par. Ava Lucas (Raleigh, NC 2021) posted a first-round score of 71 (-1), and eventually finished runner-up one stroke behind Lee.

The Futures division saw a newcomer come from behind to take the title in the thirty-six hole event. Terra Schmidt (Raleigh, NC 2023) began the final round tied for second and one stroke behind the overnight leader Madison Myers (Cary, NC 2025). Schmidt handled the pressure of playing in the last group quite well, firing a calm (+2) round of 74 that included two birdies en route to a two day total of 152 (+8). The Raleigh, NC, ran away from the field, eventually winning by four shots. Finishing runner-up was Ellie Acrey (Winston-Salem, NC 2026), followed by Caroline Gilreath of Roanoke, Virginia (2023).

Expect anything different than a shootout in the Discovery division? Cause we didn’t! After the first round, two were tied at the top. Jenna Kim (Raleigh, NC 2027) and Michelle Yeung (Clarksville, MD 2027) both fired an impressive 32 (-4) on their opening nine. Kim resumed her hot start in the final round, birding the first two holes. Her next six holes included another birdie, an eagle, and three pars. The lone blemish on the card occurred on the ninth, where the Raleigh, NC native bogeyed. Jenna has only been beaten once in her five events so far on the season and leads the Discovery NC Storie Order of Merit by quite a margin. Finishing runner-up was Honorine Nobuta-Ferry (Pinehurst, NC 2028) at (-7) over 18 holes.

To view the photo album from the event, click here. (Photo album will be posted to Facebook on Friday afternoon)

The final PKBGT event of June concluded right outside our home office at Greensboro National Golf Club in Summerfield, NC. Tour veterans captured the titles in all three divisions with two different states landing in the winner’s circle.

In the Prep Division, Becca Connolly (Winston-Salem, NC 2020) captured her first PKB Girls Tour title of her career after posting a (+3) round of 75 that included a (-1) back-nine. Connolly was even on all of the difficult par threes at the Boro National Golf Club. The Winston-Salem native won by two strokes over the next best competitor. Runner-up in the event was Katelyn Griggs (Lexington, NC 2022) posting a (+5) 77.

Capturing the Futures National title was Macy Johnson (Salem, VA 2023) firing a (+3) round of 75 which included two birdies. Johnson also took home gold in the weather-shortened Bermuda Run event a few weeks back with her front-nine score of 35 (-1). Sandwiched between her two wins was a top 10 finish at The Donna Invitational over the weekend. Finishing runner-up was Katherine Dann (Charlotte, NC 2023).

A total of six birdies in their nine holes propelled Honorine Nobuta-Ferry (Pinehurst, NC 2028) to her first win of the 2020 season. Nobuta-Ferry has finished runner-up in her last four starts before finding pay dirt at Greensboro National. Karsyn Herron (Graniteville, SC 2027) finished two strokes back of the Pinehurst, NC native at (-1) for the nine-hole tournament.