Inside the Field: 2021 PKBGT Invitational

Inside the Field: 2021 PKBGT Invitational

We are eight days away from the most prestigious event on the year-long PKBGT circuit: the 13th PKBGT Invitational. The PKBGT Invitational is a 54-hole championship event played on both the east and west courses of Bermuda Run Country Club in Advance, North Carolina outside Winston-Salem – with layouts of over 6100 yards at each venue.  With players from 13 states – let’s take a look inside this year’s field of 60 at the 2021 PKBGT Invitational!

Strength of Field in a Class by Itself

While this event typically boasts a strong field, the 13th playing of the Invitational will feature its highest-ranked field yet, with 52 players inside the Top 1,000 on Junior Golf Scoreboard national rankings. Even more notable, 33 of these players rank inside the top 500, making the average player in the field ranked 494 in the country.  The 2020 PKBGT Invitational, the 24th ranked tournament in the country in past year as ranked by Golfweek Junior Golf Rankings, the average player in the field ranked 610.

History?  We Have History!  Past Champions achieve great heights

10 different ladies have raised the championship bowl at the PKBGT Invitational in its 12 year history (View the Event History).  Inaugural Invitational champion Katherine Perry Hamski is in her 5th year on the LPGA Tour.  2011 & 2012 champion Lucia Polo and 2013 champion Anna Redding are members of the LPGA Symetra Tour.  The Wake Forest University duo of 2014 champion Emilia Migliaccio and 2015 champion Rachel Kuehn are two of the top amateur players in the world.  Recent champions include 2017 & 2019 champion Amanda Sambach who is a freshman at the University of Virginia and 2018 champion Anna Morgan, who is staring at Furman University.  Defending champion Adrian Anderson is a recent commit to the College of Charleston.

Featured Group #1: How low can you go? 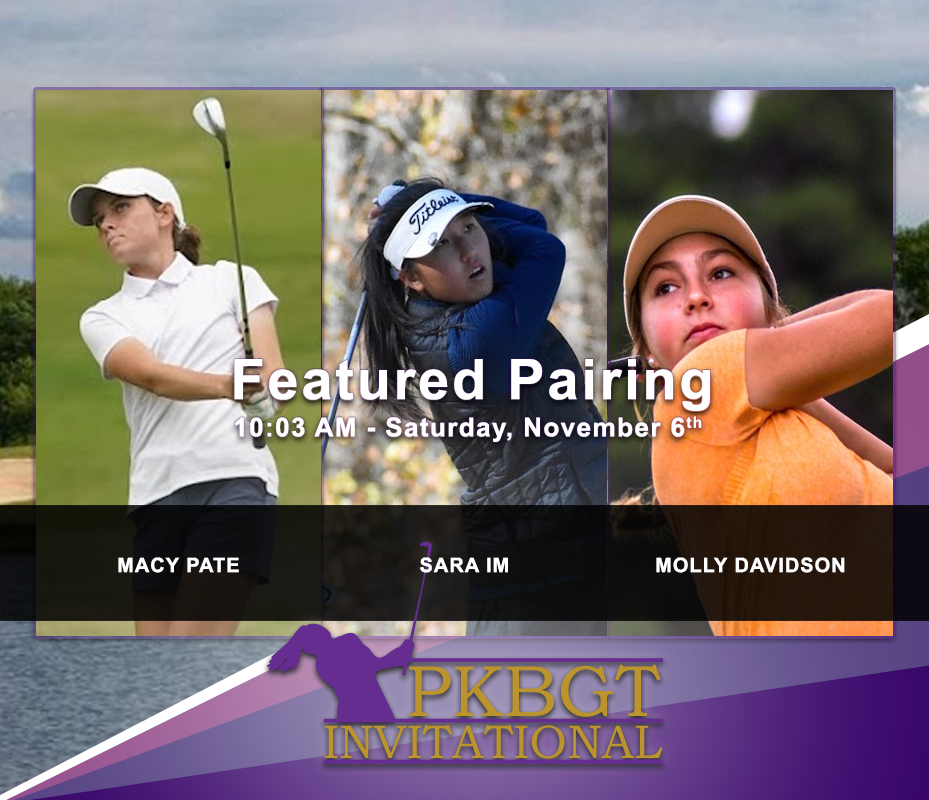 Entering the field as the highest-ranked player is Sara Im (Duluth, GA 2023). Im, the 2019 & 2020 PKBGT Invitational runner-up, will tee off next weekend ranked the 28th highest player on the Junior Golf Scoreboard. Last season, Sara set the PKBGT Invitational single round scoring record with a blistering 9-under par 63 in Round 1 on the Bermuda Run West Course.

63 on the West Course from 6,100 yards is impressive, but what about shooting a 13-under 57?  That is what Macy Pate (Winston-Salem, NC 2024) shot last month during her high school conference championship (Read about the 57 and Macy in Golfweek).  Pate, the 74th ranked player in the country and 6th on the PKBGT Performance Index, is the reigning North Carolina Girls State Junior champion.

Rounding out the group is 99th nationally ranked Molly Davidson (Birmingham, AL 2025).  The 2021 Alabama Girls State Junior champion makes her PKBGT debut at Bermuda Run, has 5 wins to her name in 2021.

Featured Group #2: The best of the best 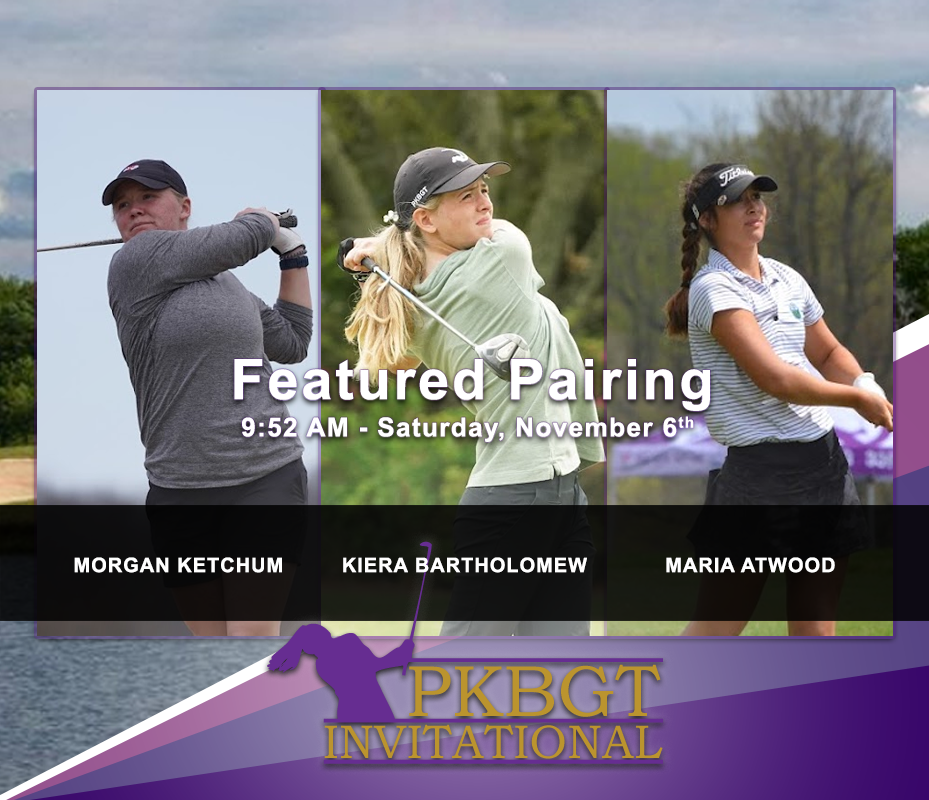 Virginia Tech commit Morgan Ketchum (Winston-Salem, NC 2022) is the top ranked player on the PKBGT Performance Index and ranked 132nd nationally.  Fresh off her North Carolina 4A individual state title earlier this week, Morgan looks to add her 2nd PKBGT Championship of the year, following her 7 shot victory (3-under 210) at the PKBGT Open Championship in May.

Rounding out the North Carolina dominant trio is Maria Atwood (Holly Spings, NC 2022).  The James Madison University commit is the 3rd ranked player on the PKBGT Performance Index and ranked 115th nationally.  The PKBGT Bell National Order of Merit runner-up in 2020 and 2021, Atwood looks for her 2nd PKBGT Championship of the year after claiming the PKBGT Mid-Atlantic Girls Championship at Bulle Rock GC back in April.

In addition to our 6 featured players, 9 additional players in the field are currently ranked inside the top 200 players in the country by the Junior Golf Scoreboard.  They are:

Youngsters in the Field

They say age is just a number, which proves to be true for Ellen Yu (High Point, NC 2026) and Irene Kim (Woodstock, MD 2026), two of the top players in the country from the Class of 2026.   This will be Yu’s third time in the field and Song’s first. Two additional members of the Class of 2026 join the field including 2021 PKBGT Futures National Order of Merit runner-up Kanchana Duangsam (Haymarket, VA 2026) and this years youngest player and reigning PKBGT Futures National Tour Championship winner Caroline Hawkins (Columbia, SC 2026).

15 of the 60 player Invitational field have verbally committed to play collegiate golf:

The first round of the 13th PKBGT Invitational, begins Saturday, November 6th, on Bermuda Run Country Club’s West course. We look forward to a great event!