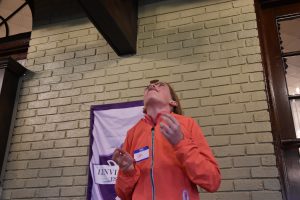 The weekend began on Saturday with leadership and team-building activities. The six teams and coaches were challenged with ten “Minute to Win It” games that tested both their mental ability and hand-eye coordination. Team North Carolina West captured the title for the second straight year thanks to a late charge winning three of the final five games!

The modified-alternate shot format provided plenty of opportunity for great scoring for the six teams in the Sunday morning matches. In the end, NC West, National, and Southeast were the winners of the morning, earning 7 points, 5 points, and 6 points, respectively.

The big winner of the afternoon matches was NC East, who swept 8 points to none against Team Southeast, who played quite well in the game as well. NC East was just absolutely dominant from tee to green! 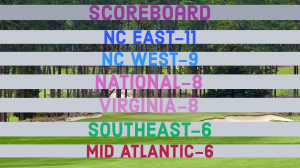 The team points after day one of matches at the 2020 Linville Cup.

The championship matches were set! In the fifth-place match, Team Southeast and Team Middle Atlantic. In the third-place match, Team National versus Team Virginia. In the battle for the Linville Cup, Team NC East against Team NC West! For the third straight year, the cup would stay in the state of North Carolina.

After the conclusion of play, the forty-eight players and coaches convened for an evening of fellowship and learning with special guests Robert Linville, the co-founder of the Peggy Kirk Bell Girls Golf Tour, and the coaches of the six Linville Cup teams. The young alumni and mentor coaches answered a panel of questions on how golf impacted their careers and life. 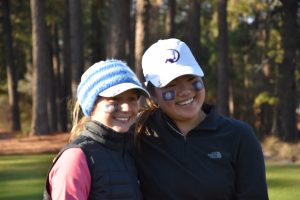 3rd Place Match (Virginia vs National)- The third-place match had to be decided in extras before Raquel Walker (Burke, VA Class of 2026) and Ester Choi (Midlothian, VA Class of 2021) closed out the match on the second playoff hole for Team Virginia.

1st Place Match (NC West vs NC East)-  The battle of the Tar Heel state did not disappoint on a frost delayed Martin Luther King Jr. Monday. NC East jumped up to an early in, but NC West pounced on the 5th hole in nearly every match. Congratulations to North Carolina West for retaining the cup for the second straight year! 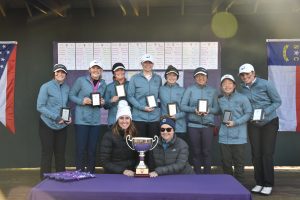 One-day tournaments are designed for golfers of all skill levels but are a great place for development golfers to “get into the swing of things” playing tournament golf. The goal of One-Day Open Series events is to provide a fun and friendly tournament on a premium golf course.

Founded in 2007 by the Triad Youth Golf Foundation, a non-profit 501(c)(3) charitable organization, as a local girls’ golf tour in the Triad region of North Carolina, the tour began as a simple concept: create more effective competitive playing opportunities for girls. By utilizing innovative yardage-based divisions instead of the traditional age-based format, the tour focused on developing tournament experience at the player’s pace. The 2020 season will feature over 100 tournaments in 9 states on the East Coast and with over 900 members, the PKBGT is the largest girl’s only tour in the country.  Learn more about the PKBGT at http://www.pkbgt.org/.