Greensboro, NC- There were many reasons to celebrate over this past weekend with the resumption of tournament play at the PKBGT Open Championship hosted by the Country Club of Salisbury. An event voted annually as one of the best tournaments on the PKBGT circuit had an even greater significance since the tour had to cancel the Prep Preview finale event in early March. With a need to conclude the National Prep Preview series, the PKBGT Tour staff felt it fitting to end the series at a major championship event. 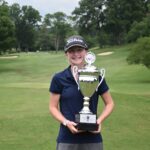 It was all but finalized who would be the next recipient of the Prep Preview Order of Merit (OOM) trophy when the first tee shot of Grace Ridenour (Cary, NC 2025) landed in the fairway on Monday morning at the Open Championship. The Cary, NC native held a substantial lead over the next best competitor in the rankings & 8 players in the top-10 were not participating in the event. By the end of the two days, Grace held a 120 point lead over Gracie Song (Waxhaw, NC 2026) in the OOM race.

Ridenour finished in the top 5 in five of the six events she played in the Prep Preview division. In her other start, she snagged a T9 finish.

Grace’s scoring average after the series concluded was a hair over 80 with her low round of 72 (+1) occurring over the weekend at the PKBGT Open Championship.

Founded in 2007 by Girls Golf of America, a non-profit 501(c)(3) charitable organization, as a local girls’ golf tour in the Triad region of North Carolina.  The tour began as a simple concept: create more effective competitive playing opportunities for girls. By utilizing innovative yardage-based divisions instead of the traditional age-based format, the tour focused on developing tournament experience at the player’s pace. The 2020 season will feature over 1110 tournaments in 9 states on the East Coast, and with over 1,000 members, the PKBGT is the largest girl’s only tour in the country.  Learn more about the PKBGT at http://www.pkbgt.org/.